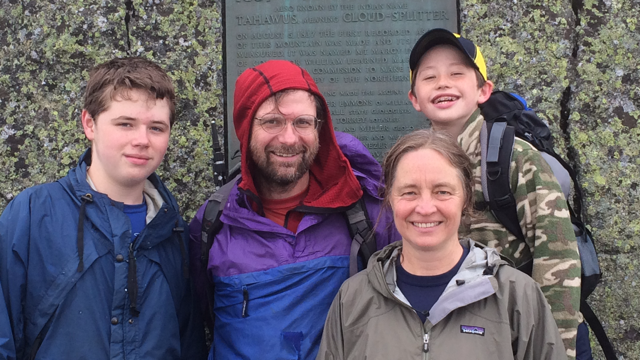 I was diagnosed with gestational diabetes in 1999 while pregnant with my first child. The diabetes never went away, and after a lot of testing, it turned out I had adult-onset type 1. My son was fine, but had a lot of food allergies as a baby and child. He was nursing so we both had to limit our food so that he wouldn’t be covered in rashes and waking up constantly at night. By age 4 he had started sleeping a little better and I figured maybe I could handle a second child. I did not want to go through this food allergy nightmare again, so I ate only non-allergenic foods while pregnant and nursing my second. He was born in 2004, and by this time I was wearing an insulin pump and had my diabetes in good control. He did not have the food allergies of his older brother, but I kept him off allergenic foods in early childhood just in case.

Then, when he was just 23 months old, we noticed he was drinking a lot… of course type 1 was always on my mind, so I finally got the courage up to prick his tiny finger and check his blood sugar with my meter. It just said, “HI.” We went directly to the ER, where he was diagnosed with type 1 diabetes. That changed our lives. I was actually thankful that I already had some experience managing this disease, but managing it in a toddler is quite a different story than in an adult. We got him on a pump within a month, and a dexcom cgms within 6 months (in 2007, long before it was approved for use in children– thanks to good health insurance!).

At the same time, my dad was dying of cancer, so we would visit him out of town. In the mornings after I got up, I didn’t want to leave my newly diagnosed baby sleeping alone in the bedrooom so I sat at the computer and started looking more deeply into type 1 diabetes. I had heard that the incidence was increasing, but was it really? And how did we know? I discovered www.PubMed.gov, a database of all biomedical scientific studies. Here was a goldmine. I just searched and searched and read more and more articles. I started compiling them, first the studies on incidence, then on the various environmental factors that might explain why incidence was increasing (which it was indeed doing, all over the world).

Eventually I made a website to summarize what I had found.

I’ve maintained it over the years, adding new studies all the time (www.diabetesandenvironment.org). There are a lot of studies on type 1 diabetes and its potential causes, and while there are no “proven” methods of preventing it, I think the studies point to some potentially safe ways of intervening that would be worth a try.

For example, hundreds of studies link vitamin D deficiency to diabetes development. We know that it is not healthy to be deficient in vitamin D. Everyone can ask their doctor to test their vitamin D levels, and take appropriate supplements if necessary. It is cheap and easy. I never did because I figured I was outside a lot and didn’t need to. I was wrong– it turns out I was deficient in vitamin D– and I didn’t find that out until after my pregnancies. If I had corrected that earlier in life, maybe it could have helped. We will never know, but maybe this knowledge can help someone else! For my son and I, now I know to get our levels tested, and based on that, I know we tend to be low (even in the summer). Numerous studies have found vitamin D deficiency linked to increased risk of diabetes complications, so maybe we can help prevent those too.

In the meantime, my eldest son had been in TrialNet for a number of years and has always tested negative for autoantibodies.

I figure that’s more due to luck than anything else– occasionally he takes vitamin D and omega 3s and so forth, but I can’t say we are very good about it. He has always eaten a good diet, and exercises regularly. I buy a lot of organic food, try to limit chemical exposures (which are actually linked to diabetes, although there aren’t yet many studies on type 1 in particular), and try not to worry or feel guilty about it too much (stress is also linked to diabetes…).

After reading thousands of studies by now (well, at least the abstracts!), I personally think there could be many “causes” of type 1 diabetes, and it can be different in different people, with various environmental factors interacting to promote or reduce disease development, in combination with genetic background. We will never really know why we got type 1, but various factors may play a role to increase or decrease risk. A few of them you can control– but not all– so you do what you can do and learn from other’s experience. I hope people who are interested will check out the website and hopefully find some useful information– there is a lot out there!